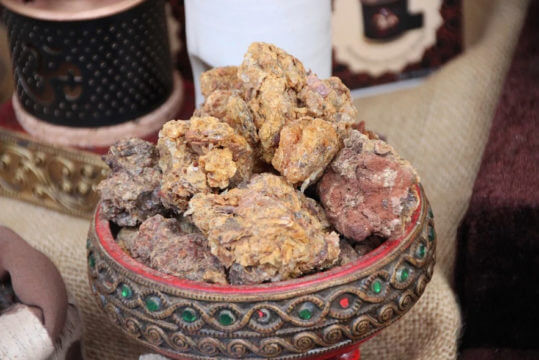 Myrrh is most commonly known for being one of the treasures delivered to baby Jesus in the New Testament narrative and has a long-standing history dating back thousands of years.  There is both textual and archeological evidence that suggests myrrh has been used for medical purposes throughout history. In fact, myrrh has been mentioned in the bible 152 times to be precise – known to purify the dead, used for holy anointing, and with references to this plant-derived substance having magical powers.

Myrrh is a resiny brownish sap that comes out of cuts from the bark of trees that are members of the Commiphora species. This species of tree typically grows in Africa, Saudi Arabia, and Oman. A little goes a long way, so pack animals such as donkeys and camels were able to carry usable quantities along ancient trade routes in the Middle East.

Myrrh, meaning ‘bitter’ in Arabic, is widely considered by herbalists and practitioners of Chinese medicine to be one of the most effective substances for sore gums. Even in the west, it is renowned for its astringent and antiseptic properties as well as for promoting healing. This is why we just had to include it as a vital ingredient in our all-natural tooth and gum formula.

The healing powers of myrrh

Myrrh’s powerful healing powers were highly regarded by royalty, nobles, and wealthier people from Greece to India, and it was even considered more valuable than gold!

It is so antiseptic that it was used for embalming and mummifying Egyptian Pharaohs. And as a potent astringent and healing agent, it became an essential for ancient Greek soldiers who would carry it into battle to treat wounds and prevent gangrene.

In addition to its antiseptic, antimicrobial, and astringent properties, myrrh is used to repair damaged tissue and stimulate circulation in mucous membrane tissue (including the gums). This medicinal, natural gum has historically been used by itself to soothe swollen gums as well as for canker sores, sore throats and sinus infections.

Myrrh is also used for indigestion, ulcers, colds, lung congestion, arthritic pain, cancer, and leprosy. It is also used as a stimulant and to increase mentural flow.

In ancient times, myrrh – often used with a combination of frankincense – was burned in places of worship to purify the air and prevent the spread of contagious diseases.

There has been some research to suggest that myrrh is very effective at killing bacteria as well as stimulating the immune system to produce white blood cells, which are also responsible for killing bacteria.

Myrrh’s incredible antiseptic, antimicrobial, astringent, and bacteria-busting properties made sure this ancient ingredient stood out for Isabelle Dunkeson when deciding which ingredients to include in her all-natural herbal, tooth and gum formula.

As Isabelle explains in our article “Inside Isabelle: My Angelic Dream”, the ingredients for Good-Gums came to her “as light as an angel’s eyelash”.

With her extensive knowledge of herbalism and natural medicine, Isabelle could have chosen a million ingredients to put together but her intuition guided her to specific ingredients that she just knew would work together to heal her gum problems. As soon as she started brushing her teeth with the formula, her gums began to heal themselves, and her gum pockets disappeared!

Click here to try our all-natural tooth and gum formula.

Remember, what’s goof for your gums is good for you!

We’re quite surprised we haven’t already written a blog raving about the effects of ginger, because, well, it’s probably the longest standing member of the “superfoods” club above any other. We love this powerful plant because it has absolutely incredible health benefits, so much so...
View article
How to get more Cranberry in Your Diet As we explain in our article, “Cranberries – The Thanksgiving Superfood Your Teeth & Gums LOVE”, cranberries are jam-packed full of phytonutrients, anthocyanins, flavonoids, phenolic acids, and many other vitamins and minerals that are excellent for your...
View article
You don’t need us to tell you how important it is to brush your teeth regularly. It’s been drilled into us since a young age that we must brush our teeth morning and night if we want to keep our pearly whites glistening, our gums...
View article
This nutritious, dippable veggie is a dentist’s dream. Because of its crunchiness, celery forces you to chew more in order to eat it, which, in turn, produces more saliva. And we all know what more saliva production means, don’t we? Saliva acts as your own...
View article